10 Jan 1972 ushered in a new chapter in the history of Bangladesh. The glorious return of Bangabandhu Sheikh Mujibur Rahman, freed from Pakistan prison, to the soil of independent, sovereign Bangladesh, marked the beginning of a new era. The very day after he returned, Mujib set out to deliver the new country’s Constitution. One of the prodigious achievements of the first year of Bangladesh was its successful completion.

Under Mujib’s patronage and leadership, the Constituent Assembly enacted and adopted the Constitution on 4 November 1972. It came into operation on 16 December 1972. The priority given to these actions represents a clear manifestation of Mujib’s staunch commitment to parliamentary democracy and constitutionalism.

Mujib was fully aware of the need for a Constitution. Under his guidance the Constituent Assembly was steadfast in delivering a forward-looking document in the shortest possible time: less than one year. History shows that other countries have taken many years to frame such a process. Mujib’s achievement conveys a strong message about the real agenda as he saw it. 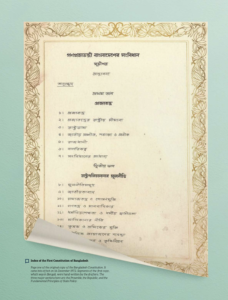 All his life, Mujib fought to establish the rights of the Bengali people. The struggle to free the people of East Bengal from the clutches of poverty, hunger, inequality and exploitation was long. Mujib’s dream was to build a Sonar Bangla (Golden Prosperous Bengal). It was his clarion call on 7 March 1971 – ‘We shall give more blood. God willing, we shall free the people of this land’ – that united the nation. Mujib declared independence early in the morning of 26 March 1971: ‘This may be my last message, from today Bangladesh is independent’ (Sixth Schedule, Article. 150(2) of the Constitution).

Mujib thus conceptualised the underlying rationale, historical context and philosophy of the political and economic emancipation of the people of East Bengal as the frame for the Constitution. His Constituent Assembly Speech on 4 November 1972, on the adoption of the Constitution, is an invaluable document as it unveils the entire gamut of factors: socio-economic and political aspects as well as the historical context of the struggle facing the nation. The speech covers the 23-year struggle from 1948 to 1971, from emergence of the language movement to the arrival of an independent, sovereign Bangladesh through a war of liberation.

The Constitution as a reflection of the long struggle

The long arduous struggle for independence forms the bedrock principle of the 1972 Constitution. Mujib begins his speech with great pride: 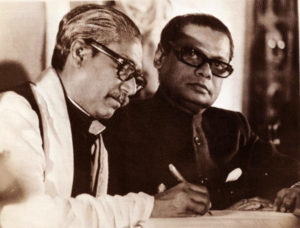 The Constitution of 1972 has been termed by scholars ‘a truly democratic Constitution’. Mujib boldly spells this out:

This Constitution is written with the blood of the martyrs.

This is the underlying rationale for describing the Constitution of 1972 as ‘autochthonous’:

It is an Autochthonous Constitution because it refers to the sacrifice of the People in the war of National Independence after having proclaimed independence (Paragraphs 55 and 292 of the 8th Amendment Judgement, Anwar Hossain vs. Bangladesh, 1989).

Autochthonous literally means that the concept has arisen originally and independently without having an external source.

The Constitution of Bangladesh is not the outcome of a negotiated settlement with the former colonial power, nor drawn up with the concurrence or approval of any external sovereign power. It is the fruit of historic war of independence making it a class apart from other Constitution of comparable description (Dr Mohiuddin Farooque vs. Bangladesh, 49 DLR (AD) 1, Para 41).

Mujib’s philosophy as the bedrock of the Constitution

Mujib defined in very simple terms the fundamental values of our Constitution – the four pillars of nationalism, democracy, secularism and socialism. These ‘values’, the ‘guardrails’, are the fundamental tenets that constitute the guiding spirit of the Constitution. The Constitution has to serve as the supreme law of the land but also the embodiment of values and fundamental principles to guide the democratic polity.

To Mujib, ‘Nationalism is a feeling.’  He elaborated:

Similarly, Mujib defines democracy to be a process of governance that ensures the welfare of ordinary people. In the current context, we often emphasise that democracy is an effective process of realisation of goals that are deeply ingrained in people’s development aspirations. This is precisely how Mujib envisioned it when inserting it as a pillar of the Constitution.

Mujib explains socialism as ‘exploitation-free society’. This is aptly reflected in the Preamble of the Constitution:

‘It shall be a fundamental aim of the state to realise through the democratic process a socialist society, free from exploitation—a society in which the rule of law, fundamental human rights and freedom, equality and justice, political, economic and social, will be secured for all citizens.’

The Preamble also captures Mujib’s belief in ‘bringing joy to the lives of destitute people’. The political and economic emancipation of the Bengali people was at the core of his struggle, and this is the crux of the Constitution. The theme runs like a golden thread throughout, echoed in the Fundamental Principles of State Policy (Part II) and the Fundamental Rights (Part III). Mujib also emphasised the need for social justice. To him, this had a comprehensive meaning: securing political, economic and social justice for all.

The concept of ‘secularism’ has been defined as the right of every citizen to profess, practise or propagate any religion. This also was enshrined in Bangladesh’s Constitution as one of the four pillars.

The ‘people’s verdict’ basis for legitimacy

The Constitution of Bangladesh, as the solemn expression of the will of the people, is the supreme law of the republic. The deliberations of Mujib as a parliamentarian in the Constituent Assembly and the National Assembly of Pakistan during 1955–1958 demonstrate his undaunted commitment to ‘people’s power’. He firmly believed that the ‘people’s verdict’ was the ultimate legitimacy in exercising any power. Time and again, Mujib reiterated the need for ‘people’s consent and participation’ in the decision-making process.

In his speech on ‘Merging the Four Western Provinces of Pakistan into One’ delivered on 25 August 1955, he said:

‘I fail to understand how he [Sardar Amir Azam Khan] can claim to have the support of the People of Pakistan in favour of this One-Unit Bill – in fact this issue was never put before the public at any time… I am saying what the ruling clique is doing now. They want that Karachi should be included in One-Unit whether the people want it or not. Sir, it is the right of the people of East Bengal also over this city and they must be consulted before including Karachi in One-Unit… Sir you will see that they want to place the word ‘East Pakistan’ instead of ‘East Bengal’… You can change it only after the people have been consulted. It you want to change it then we will have to go back to Bengal to ask them whether they accept it.’

At every stage, Mujib insists on the verdict of the people. His ardent commitment to ‘people’s power’ is reflected in Article 7 – the polestar of the Constitution:

‘All powers in the Republic belong to the people, and their exercise on behalf of the people shall be effected only under, and by the authority of, this Constitution.’

A clarion call to future generations

The most important message is to be found at the end of his speech of 4 November 1972, where we find a farsighted clarion call, a futuristic appeal to the nation. He rests the onus of making the Constitution a reality on future generations. It is his firm conviction that the struggle throughout his life will be meaningful (and the sacrifice of martyrs will be fruitful) if future generations can build a society free from exploitation. His life will be fulfilled when future generations cherish the values of nationalism, democracy, socialism and secularism, as enshrined in the Constitution.

Relevance of the Constitution of 1972

The message is crystal clear. The essence of the Constitution can be realised only when it can bring about positive changes in the lives of the disadvantaged population of the country. The solemn pledges in the Constitution are made to eradicate poverty and inequality and ensure food security, education and health care for all. The pledges of the Mujib-framed Constitution dictate the fulfilment of the development aspirations of the people of Bangladesh. It is for us and future generations to achieve the goals of the Constitution, in order to realise the dream of establishing Mujib’s ‘Sonar Bangla.’

A leader with indomitable courage and selfless love for his people, Sheikh Mujib is a beacon for all freedom-loving people of the world. It is our firm conviction that his dream and vision for his beloved country will continue to embolden all nations that uphold the values of fundamental freedoms and human rights, rule of law and democracy. His legacy will continue to be the guiding pole star in our march forward.

WhiteBoard is a quarterly policy magazine by Centre for Research and Information.