As Bangladesh prepares to celebrate the birth centenary of Bangabandhu Sheikh Mujibur Rahman, the revered founding father of the country, and as this youngest of the three post-Raj sub-continental nation-states approaches 50 years of independence, it is worth recounting the foreign policy vision of Mujib for the new nation as it emerged from its bloody war for freedom in 1971. 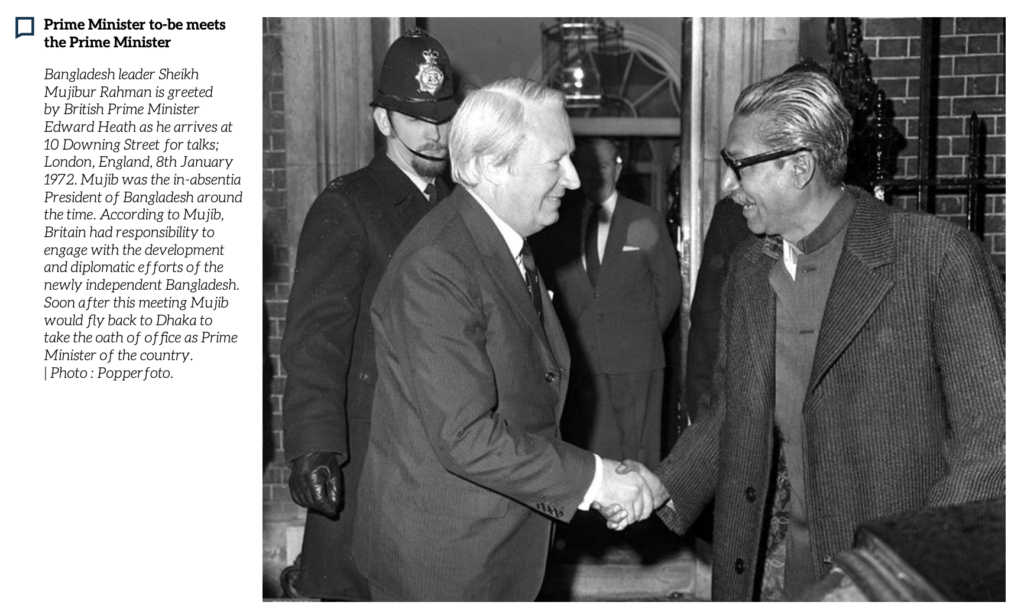 The global background for these unfolding events in that fateful year of South Asian history was of course the Cold War. The ideological struggle between capitalist nations and the Soviet Union and its adherents in the socialist bloc began in 1917 with the unlikely triumph of Karl Marx’s socialist revolution in the primarily agrarian tsarist empire as it crumbled in the midst of World War I. The stand-off had waxed and waned but was without doubt a life-and-death struggle; as British historian Perry Anderson put it in his book American Foreign Policy and its Thinkers, communism was an alien force dedicated to destroying a world system premised on the private ownership of the means of production.

Indeed, officialdom on the frontlines saw this as a holy war between incompatible worldviews. The preferred path for many nations in the ‘Third World’, however, was to refrain from becoming drawn into this titanic nuclear-tinged confrontation, under the policy of neutralism or non-alignment – which powerful actors in the world system did not consider an acceptable option. Indeed, Loy Henderson, US Ambassador to India – one of the largest of the newly independent countries after the end of World War II –after the start of the Cold War in 1945, had reputedly declared New Delhi’s Nehruvian foreign policy a moral failing.

Amid such tense face-offs and ominous mutterings, Bangladesh’s liberation war, the triumph of a small nation, leading as it did to the breakup of the staunch anti-Soviet Pakistani state, therefore naturally ruffled feathers in world capitals. And yet the establishment of Bangladesh should not in any event have been seen as a Cold War setback. Mujib and the Awami League had always been friendly and sympathetic towards the USA pre-1971. The people of the USA had supported the just cause of the liberation war. There was no question whatsoever of Mujib changing the foreign policy position of Bangladesh post-1971 in this regard. It was the intransigence of the political and military elites in West Pakistan that had brought the events of 1971 to pass; for this, the Bengali people and their leader could not be blamed in any way. The fact remained, however, that Mujib now had to take the lead in mending fences where necessary.

It was now that Mujib unveiled a unique foreign policy that transcended non-alignment – an outlook encapsulated as ‘friendship towards all and malice towards none’. For Bangladesh, emerging from a victorious but costly freedom struggle – in both human and material terms – and with an economy and infrastructure shattered and now in need of urgent repair, no other policy could have been more timely and apt. After watching the ruthless colonial exploitation of East Bengal, her people and her wealth for 24 years by West Pakistan, now as the leader of a free Bangladesh, Mujib was resolved to work towards the dream of a prosperous Golden Bengal as expressed in the poetry of savant Rabindranath Tagore.

Such an aspiration could not be realised through ideological rigidity. The Soviet Union, along with India, had backed Bangladesh during the war, and extended early assistance in the rebuilding process, but did not have the capability to effectively provide for the needs of the new country. While Mujib certainly appreciated the aid of old friends, he also realised that broader alliances would be needed for Bangladesh to recover and then march forward on her desired path. Bangladesh’s membership in the World Bank and its establishment of relations with other international institutions were geared towards these ends. Mujib also actively sought out ideas and innovations in other parts of the world that could be utilised effectively and locally in Bangladesh, again without being prejudiced in any form or manner as to their origins.

Old and warm friendships were re-established, such as with the USA, cemented through a meeting between Mujib and President Gerald Ford (1974–1977) in October 1974. Distortions about the liberation war were corrected both behind the scenes and publicly, and relationships resumed with China and the Organization of Islamic Cooperation. All of these efforts would culminate in Bangladesh’s successful admission to the UN under the leadership of Mujib, a moment enshrined in history by his speech in Bengali to the UN General Assembly on 25 September 1974.

While maintaining cordial friendships with the powerful, Mujib never forgot about the oppressed in the world, with whom he naturally identified. As he travelled the globe, he met with the leaders of other developing nations and their peoples, from Cuba to Palestine, extending not just words of solidarity but also tangible expressions of Bangladesh’s goodwill.

Despite achievements in the realm of foreign and economic policy, there were, for a fledging Bangladesh, limitations on what could be attained in the 1970s. The constraints again had to do with a series of crises that had hit the world system: a major economic slowdown for the first time since 1945, a shortfall in global food markets and a spike in oil prices resulting from the Arab–Israeli War of October 1973. The impact would be universal: the USA itself would face the seemingly intractable phenomenon of stagflation. Despite the best efforts of Mujib and his administration to counteract the negative effects, Bangladesh also would be engulfed by this severe downturn during 1974–1975.

On 15 August 1975, a clutch of traitorous, anti-liberation war military officers and other criminal conspirators brutally murdered Sheikh Mujibur Rahman and over a dozen members of his family. His two daughters, Sheikh Hasina and Sheikh Rehana, who were abroad at the time, escaped this bloodbath. The dark, malignant shadow of illegitimate military rule descended on Bangladesh.

It would not be until the mid-1990s, with the restoration of democracy, that Bangladesh’s foreign policy would once again revert to the compassionate vision of its founding father under the first term as prime minister of his daughter Sheikh Hasina (1996–2001).

After another intervening period, since 2009, once again under Sheikh Hasina, Bangladesh’s foreign policy has charted a course in the realm of foreign policy that has adhered remarkably to Mujib’s worldview.

Bangladesh once again counts among its friends not just the major world powers but also the nations of the Global South, and has distinguished itself by singular acts of generosity in the international community. In particular, since the onset of the Rohingya crisis in 2017 – in actuality an ongoing calamity going back to mass expulsions carried out previously in 1978 and 1991 – in neighbouring Myanmar, Bangladesh under Sheikh Hasina has open-handedly provided shelter to over a million defenceless civilians fleeing the genocidal ethnic cleansing being perpetrated by the militarist regime in Naypyidaw.

It is only due to Sheikh Hasina’s statesmanship and measured diplomatic responses to this unimaginable human suffering that this part of the world can be thankful that the situation has not deteriorated into a full-blown regional crisis. This compassionate approach, and solidarity with the oppressed, is not only testament to Sheikh Hasina herself but also a direct link to Sheikh Mujibur Rahman’s visionary foundations of Bangladesh’s foreign policy at the country’s inception. In the centenary year of his birth, in the realm of foreign policy there can perhaps be no greater tribute than this living expression of his vision of harmony, compassion and friendship among nations.