Bangladesh is built from the blood, sweat and tears of ordinary people, particularly women and girls. From the streets to the highest offices of the country, women have been at the forefront of every mark of progress. Fifty years on, Bangladesh is globally recognised for its development and humanitarian efforts, especially in innovating gender-sensitive practices.  Despite some setbacks, women have emerged as a driving force across the country’s sectors.

This is not surprising. Bangladesh’s women have decades of experience in rebuilding their country, through hard work and activism. They have participated in nation-building processes, anti-colonial demonstrations and national independence movements. Importantly, they were the backbone of Bangladesh’s Liberation War of 1971, popularly known in Bengali as Muktijuddho. Women’s rights defenders, in particular, have also been at the forefront of major social changes in the country.

Yet, there are intractable issues that seem to restrict women’s access to justice, in particular reparative justice. In this context, conversations about redress are urgent. The point of this article is to argue that wartime rape in Muktijuddho has long been in our discourse, but reparations for the victims and survivors have not properly been considered.

In 2019, a resolution at the United Nations’ prime organ, the Security Council, called for a survivor-centred approach to prevent and address sexual violence in conflict and post-conflict situations.[1] The obligation of reparation is established within an international treaty regime, the Articles on State Responsibility.[2] Obligation of reparation is thereby an immediate outcome of a state’s responsibility rather than a right of an injured state.[3] Reparations can be material and/or symbolic, individual or collective. It could also enable victims to acquire both the identity and the awareness of being rights holders.

In Bangladesh, 1971 wartime rape survivors are known as Birangona, which broadly translates as war hero. The narratives of sexual violence – often lost or omitted in post-war accounts – have surfaced recently through research, advocacy and survivors’ voices. They have raised critical questions about justice. These issues need the attention of the government and Bangladesh’s diverse communities. For Birangona, and in many instances for their children, meaningful justice remains an empty promise.

Research on the 1971 war reveals that voice and silence, choice and coercion, agency and powerlessness coexist in the everyday lives of women. Questioning the blind spots in the historiography is important; bringing women’s narratives into public discourse is necessary. But neither are enough.

Beside processes of formal justice, what is Bangladesh’s responsibility as a nation to the rape survivors of 1971? How could Bangladesh consider restorative justice and healing for the victims, together as a community?  Recording women’s voices about rape and sexual violence in many cases have been about bites, and less about meaningful gender justice. Attention must be drawn to everyday negotiations and struggles that rape survivors deal with.

On 22 December 1971, Bangladesh, a newly liberated republic, declared the wartime victims as Birangona.[4] Bangladesh’s first President, Sheikh Mujibur Rahman, also used Birangona to formally acknowledge the sacrifice of women for the freedom of Bangladesh in 1971.[5] Originally its use was intended to honour all women – political activists, freedom fighters, rape survivors and others – who participated in the national struggle.

The Birangona title was designed so that Birangona enjoy certain privileges, such as in education and employment, including in the public sector, which the male freedom fighters in Bangladesh do.

The Birangona title was meant to offer the rape survivors an honorary status. It was designed so that Birangona enjoy certain privileges, such as in education and employment, including in the public sector, which the male freedom fighters in Bangladesh do. The reality turned out to be different.

Birangona became a distinct marker that identified these women as victims of rape. It often subjected them to humiliation and abuse. As Bangladeshi human rights activist Faustina Pereira points out, by its very nature, the term Birangona was a restrictive privilege. So strong was the stigma of rape in Bangladesh that most women did not take advantage of the title. According to Pereira, taking advantage of the title would be tantamount to focusing on the scar of rape on the victim, thus risking a social death.

It was not only the naming that added to the stigma. Bangladeshi society did reject the women and girls who were subjected to rape and sexual torture in 1971. But there is more to the story. The presence of Birangona was a stinging reminder of how the norm of purdah, or female seclusion, collapsed during the war when men were unable to defend their women. There were women left unprotected during the war and exposed to sexual violence. Indeed, many were abandoned by their families after the war.

As a response to this complex situation, concerned Bangladeshis, especially the cultural elites of the country, recently considered a new term: nari jodjhya, or women combatants. However, a new term alone cannot address the situation of Birangona. An action plan needs to be formulated to change the patriarchal norms from which notions of shame and purity still persist.

Furthermore, in Bengali the word jodhya conventionally implies a combat role. It does not factor in the experiences of women whose lives dramatically changed outside this paradigm. Indeed, their sacrifice has been overlooked, not undocumented. Despite some attempts to respond to their needs, Bangladesh couldn’t counter the social rejection of Birangona.

In 2015, Bangladesh’s parliament unanimously passed a law to recognise Birangona as freedom fighters. Essentially, a Birangona archive would be formed. At the time, the minister in charge of liberation war affairs said that the Birangona term would be included in the school-textbooks and an honorarium allowance system would be created.

There are intricate challenges for ensuring effective prosecution of crimes of sexual violence during the 1971 war. These are relevant for the International Crimes Tribunal – Bangladesh (ICT-BD), which was set up in 2009 to prosecute the war crimes. Three narratives are important for the Tribunal:[6]

Bangladesh must also consider a complementary process which can fully document and understand the experiences of women. Such a process will provide a much-belated redress. Importantly, it will be a tangible recognition of women survivors of sexual violence from 1971.

The testimony process, whereby one must provide evidence and come face to face with the accused, is not an easy task. Yet, Bangladesh’s Birangona shared their experiences in a public tribunal in 1992. They also testified in other women-friendly platforms such as the Liberation War Museum in Bangladesh, at the Extraordinary Chambers in the Courts of Cambodia in 2013 and at the Comfort Women’s Public Tribunal in 2000 (known as the Tokyo Tribunal).

Turning to the topic of witness protection and victim support, a snapshot of this topic is founded in the ICT-BD trials. Women’s testimonies have repeatedly been used in these tribunal cases. For example, in the landmark trial of ATM Azharul Islam, Abdus Subhan and Kader Mollah, women have come forward. MB[7] gave her testimony that eventually led to the sentencing of Kader Mollah. She was 12 years old at that time.

MB’s name was not disclosed at the time of the original verdict, which was a sentence for life. However, her testimony was thereafter published and her name disclosed when the verdict converted Mollah’s life sentence into capital punishment.

Due to MB’s age at the time the crime was committed, i.e. in 1971, her credibility as a witness was raised. A senior justice campaigner in Bangladesh told the author of this article that the name disclosed in social and print media was traumatic for her. This is a serious problem. To ensure justice, the war rape victims who agreed to provide their testimonies must first be offered protection and support. To create a protection mechanism, women’s rights groups must be brought in. These groups have the expertise to deal with women’s issues, including victim protection insights.

Bangladeshi women’s organisations are diverse. They have successfully raised numerous feminist issues. They are also well versed in the socio-political movements of South Asia. As political activists, Bangladesh’s women contributed to the anti-colonial and nationalist struggle for the independence of the Indian subcontinent. This experience of activism continued to shape the character of the Bangladeshi feminist movement after 1971. The movement was localised, influenced by its struggle against patriarchy, religion, traditional practices and poverty.

Feminist organisations, such as Bangladesh Mohila Parishod, Women for Women and Naripokkho, have been at the forefront of the violence against women campaigns from the early years of the nation-building process. Human rights organisations such as Ain o Salish Kendra (ASK), BLAST and Nijera Kori have also aided with the legal reform agenda. Those organisations have tracked cases of dowry-related violence, acid throwing and rape.

The role of these organisations in Bangladesh has allowed a feminist movement to thrive and push myriad agendas like VAW, patriarchal dominance, intersectionality, labour exploitation, environmental concerns, land rights and unequal economic arrangements. Their local activism has had a positive impact on agenda-setting and bottom-up changes in state practices. 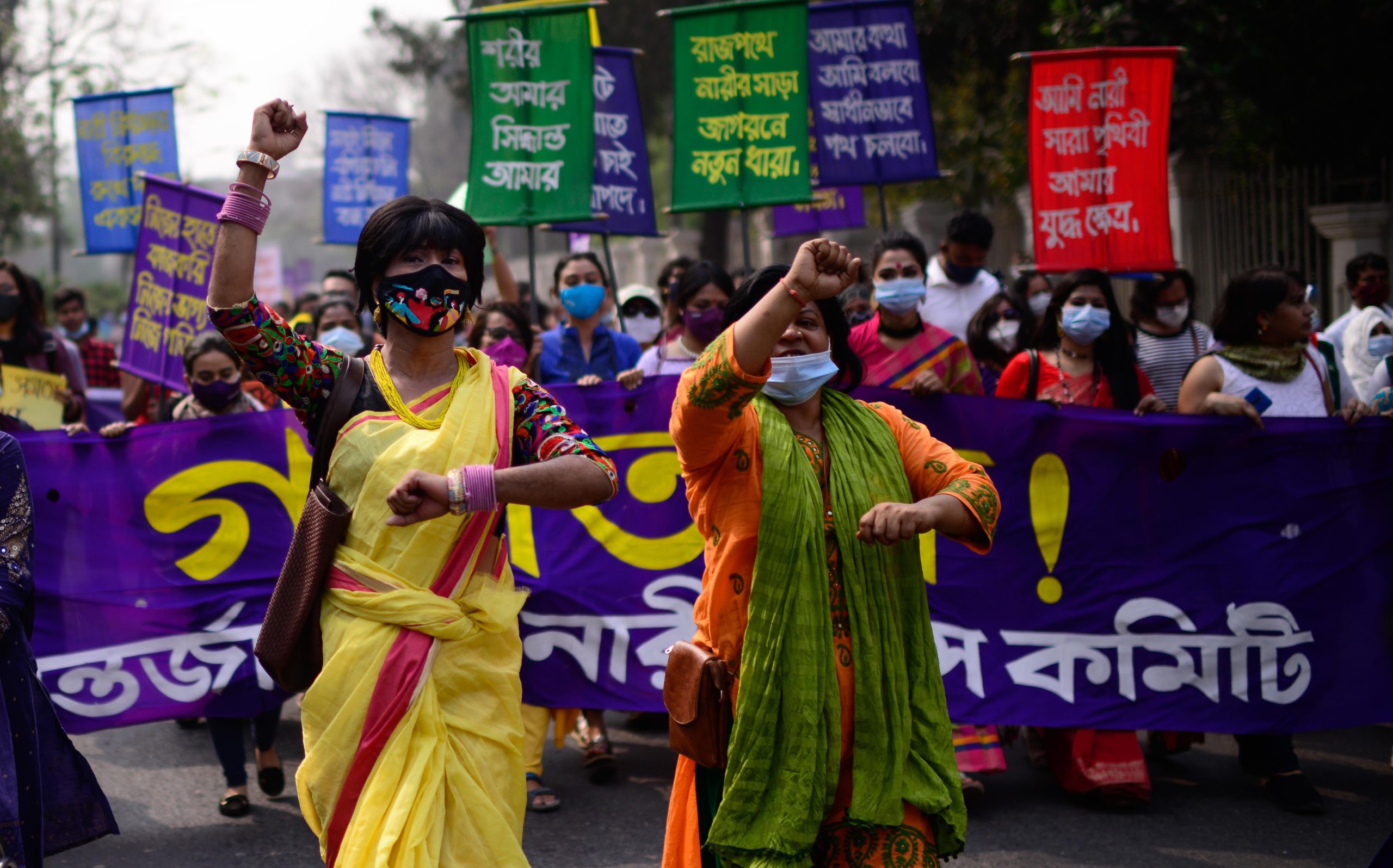 It is finally time for Bangladesh to allow a reimagination of an inclusive and restorative gender justice process – a process which will be led by Bangladeshi women. Women’s organisations have a history of working with Birangona in the nation’s post-war reintegration and rebuilding process from 1972. They are experienced in protecting women, both beyond their victimhood and in their everyday survival. In Bangladesh, this has been proven again in a recent landmark victory against the two-finger testing of rape victims. Bangladesh can now strategically engage women’s organisations to lead gender justice processes.

Globally, women’s political activism shows that the personal is connected with the political. Policies contribute to everyday realities. While feminists and human rights defenders make women’s everyday struggles visible, many of them don’t always have access to the right resources. Instead, an over reliance on media, and other literature, demonstrates that we are retelling the same stories. These stories pay lip service to women’s justice without any form of reparation for them.

A feminist-take tells us that formal trials are simply not enough to address the woman question in Bangladesh. It has to be more. Experiences of women vary, and women respond differently – according to their histories, localities, identities and politics. Birangona, especially those who live in rural Bangladesh, might reflect very differently than the ones in cities such as Dhaka. Listening to women about their choices for reparations are important. It must begin, however, with their reflection about silence or invisibility from mainstream narratives.

A reparation process cannot take place in a vacuum. It needs to be backed by social awareness and a platform of action. Bangladesh’s government should therefore work with women’s rights groups to develop safe spaces where Birangona can come forward to deliberate on different forms of reparations.

[3] An injured State means a State whose legal right has been infringed by the wrongful act of another State.

[6] Bina D’Costa and Sara Hossain, 2010. ‘Redress for Sexual Violence before the International Crimes Tribunal in Bangladesh: Lessons from History, and Hopes for the Future’, Criminal Law Forum, Vol. 21.