Statistics on development indicators are useful to politicians, policy-makers and technocrats as well as international development partners. Accurate information has a direct impact on a country’s policy-making and also in maximising its tax collection. The need for accurate statistics is well documented; nonetheless, inaccurate statistics remain a universal problem.

Strikingly, developing countries, which could benefit the most from properly kept statistics, often have ill-managed systems. This is largely because there is a shortage of funds to maintain them. This is the case for Bangladesh. Researchers and policy analysts frequently raise the issue of the quality of data, such as of national accounts. Discrepancies in real and reported data have been a hot topic for decades. However, very little has been done to address the issue.

In Bangladesh, government bodies and international stakeholders report important statistics, such as on the gross domestic product (GDP) growth rate, differently. The estimates Bangladesh’s government reports often exceed those of agencies such as the World Bank and the International Monetary Fund (IMF). For instance, in 2015–2016, Bangladesh’s GDP value ranged between 6.1% and 7.1%, which is a drastic difference from a policy-making perspective.

Even administrative data, which is data collected from the public services, has major discrepancies depending on the government agency. One glaring example relates to the regular discord in calculating crop output between Bangladesh’s Ministry of Agriculture and its centralised agency for data collection, the Bangladesh Bureau of Statistics (BBS). The Ministry data is always higher. According to sectoral observers, the reason for this is the Ministry’s need to reach set targets, which BBS does not have to answer to.

From the eyes of international institutions

Bangladesh’s economic performance has implications for its interactions with the international trade and aid system. The per capita income and consumption of Bangladeshis have grown steadily since the country’s independence in 1971.

In 2015, Bangladesh joined the World Bank-specified lower-middle-income country (LMIC) category, six years ahead of schedule. At the time of classification, the World Bank tagged countries with gross national income (GNI) per capita of USD 1,026–4,035 range as LMIC. The World Bank uses its classifications to assess the creditworthiness of a country. Transforming from a LMIC into a middle-income country means the cost of external borrowing increases.

Meanwhile, Bangladesh was also qualifying for a different graduation, classified by the United Nations (UN). The UN uses its classification as an international support mechanism to reduce the structural deficits of a country. According to the UN’s evaluation, Bangladesh is to remain a least developed country (LDC), in the lowest category, until at least 2024.

The time frame is longer in this case, because, in addition to GNI per capita, the UN uses two other important indicators, the Human Assets Index (HAI) and the Economic Vulnerability Index (EVI), to classify countries according to their development journey. Since the UN’s classification uses two additional indexes to judge a country’s position, this gives a holistic picture of progress.

What will Bangladesh’s situation be post-2024? The situation means Bangladesh will not be any of the poor-countries’ clubs. It undeniably highlights the country’s economic performance, but it also underlines the challenges. And, the challenge of quality data might be central to all of it.

The UN re-evaluated Bangladesh’s performance in 2021 and earmarked it for graduation from LDC status in 2024. The facilities currently extended to Bangladesh will be immediately revoked. As support to LDCs, the UN extends information, official development assistance on special terms and resources to cope with climate change and investment support programmes. For LDCs, the UN also provides diplomatic training and discounts their mandated contribution to the UN system’s budget.

With lessened hand-holding, good data may have even more importance in post-2024 policy-making.

This is a snapshot of all the facilities Bangladesh has been enjoying as an LDC. These facilities mean money saved. Their absence means money spent from Bangladesh’s own pocket. With lessened hand-holding, good data may have even more importance in post-2024 policy-making. If handled with caution, this situation can in fact be an opportunity for Bangladesh.

National accounts are the implementation of holistic accounting techniques for measuring the economic activity of a country. In other words, national accounts provide information to analyse the structure of economies and their development on an annual basis. The main data are GDP aggregates and government finances.

In Bangladesh, the national accounts are calculated using three different methodologies stipulated by the UN-designed System of National Accounts (SNA).  For Bangladesh, they are SNA-1968, SNA-1993 and SNA-2008. These are essentially methodological updates.

The re-estimated SNA-2008 values were produced using an average conversion factor.[1] After reconciling the GDP values, the hikes of 1989–1990 and 2005–2006 periods were smoothed. The final GDP growth rate line becomes a smooth upward-sloping curve. Bangladesh’s average GDP growth rate after the adoption of SNA-2008 for a 45-year period was 5%. The economy expanded by 795% over this period. 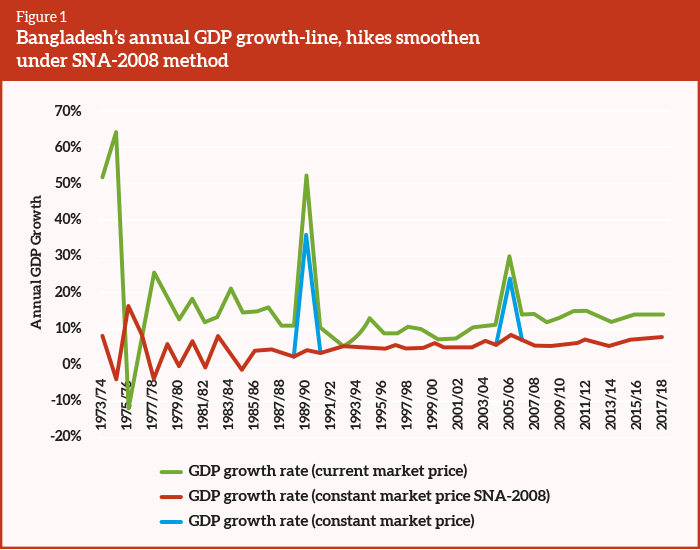 It is clear that the overall size and growth rate of GDP can vary, depending on the measurement method. Hence, the GDP growth estimates of organisations like the Asian Development Bank (ADB), the World Bank and the IMF do not match. Interestingly, this is the case even though all these agencies use the same system of national accounts. None of them collect their own data. They use the respective government’s data for their calculations. In other words, the mismatch is not the result of data sources.

If one looks at the GDP growth rates estimates for Bangladesh of ADB, the World Bank, the IMF and Bangladesh itself, the differences are clear.  Let’s take the years 2019–2020 and 2020–2021. In each of the eight cases, the real GDP growth estimates differ for the four entities. The World Bank and IMF estimates are more conservative than those of the ADB and the Bangladeshi government. Calculations of per capita real GDP growth are even more complex since they account for population growth. In Bangladesh, population growth is estimated using several assumptions, based on censuses carried out at 10-year intervals. In simple terms, underestimation of population automatically pushes per capita GDP values upward. The discrepancies in conventional GDP calculation methods being discussed here pose serious challenges to the production of accurate data. Discrepancies in terms of obtaining accurate data in turn pose serious challenges to policy-making.

For Bangladesh, the need for reliable data is more important than ever. The parallel reality is there are clear discrepancies in the national accounts. Hence, policy-makers rely on alternative methods to assess data quality. Three such cases are discussed below.

If the statistics are reliable, there is often a decipherable trend between macro data, like national accounts statistics, and micro data, like household income and expenditure data. Data in Bangladesh comes from different sources depending on its purpose. Micro data is collected through household surveys, conducted by the data collection agency Bangladesh Bureau of Statistics. Since data in Bangladesh is collected for different purposes, it needs to be harmonised before it is compared.

Let’s use this plot and compare the difference, in percentage terms, between the macro and its corresponding micro data for income, consumption (consumption-related spending) and expenditure for Bangladesh.[2] Of the three pairs, the data discrepancy is the least for the consumption indicator, followed by income and expenditure. In essence, expenditure data in Bangladesh has huge discrepancies depending on its source. According to the finding, per capita household expenditure, which is the most divergent from its macro variable, differs by 64%. For all three pairs of variables, the largest divergence is observed in 2017. 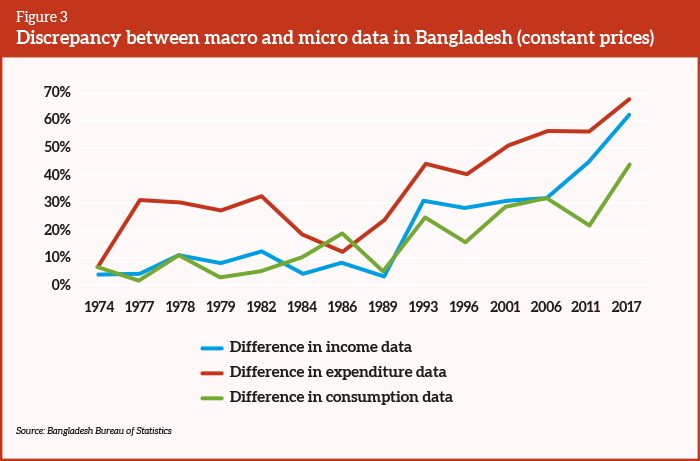 Comparing Bangladesh’s income, expenditure and consumption data macro-micro discrepancies shows that, in the initial years after independence, the data generated through household surveys was a good reflection of the ground reality. However, since 1993, and implementation of the first methodological change for GDP calculation, the difference started getting progressively bigger. The recent round shows the worst performance.

This could be a result of under-sampling of the rich in households or oversampling of the poor in household surveys. It could simply be because of increased inequality, in which the wealth of the super-rich is pushing up the aggregate data values. Other reasons may be underestimation of population growth, methodological errors or old-fashioned data manipulation. Whatever the reasons may be, this should alarm all policy stakeholders. 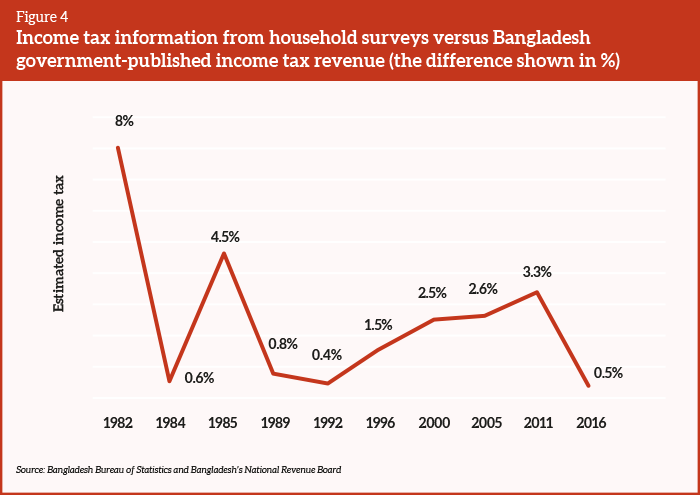 In short, the data from household surveys indicates that Bangladesh may be collecting way less income taxes than the actual income taxes realised by its government. The reasons for the discrepancy can only be two: either the income tax-paying population is being under-sampled or the top income tax-payers have been left out of the sample.

A point to note is that most of the income tax returns in Bangladesh’s history were filed in 2018. That figure was just 1.2%. This means Bangladesh’s income tax data comes from the richest 1.2% of the population.

Administrative data is information created when people interact with public services, such as schools, utilities deliveries or the benefits system, and collated by the government. To evaluate Bangladesh’s administrative data, let us take some fun variables: electricity consumption and car ownership.

Electricity connections are a good indicator of household economic status. Between 1982 and 2001, according to household surveys, Bangladeshi households with an electricity connection were oversampled and this difference grew progressively. Data indicates that the wealthier segment of the population was oversampled. The difference between the administrative data from electricity supply companies and the survey data shows major discrepancies.[5] 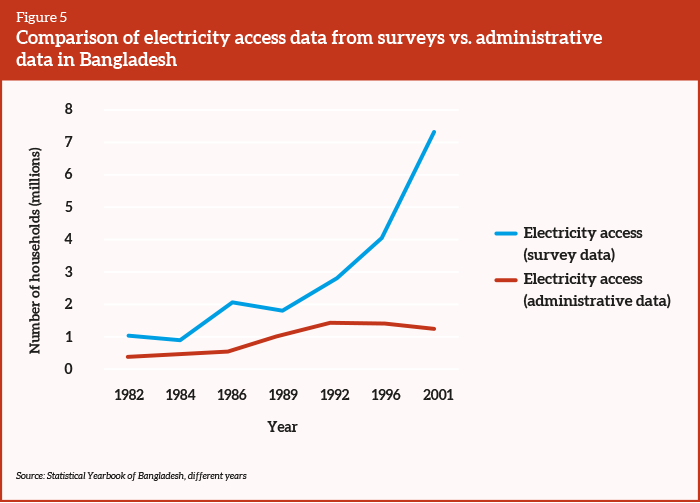 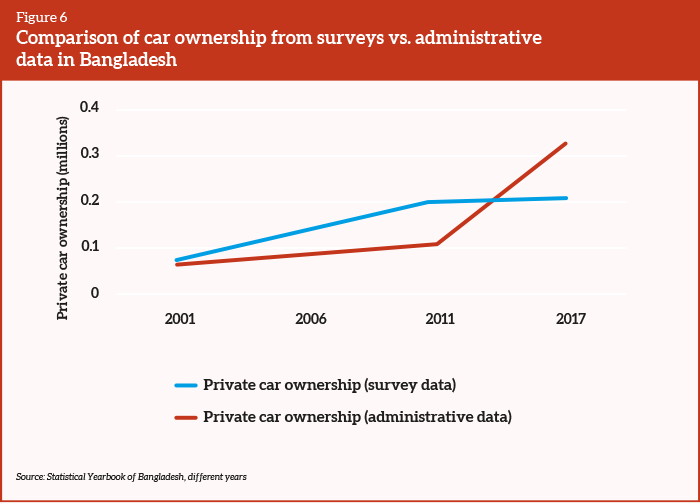 For both these indicators, household surveys oversampled the richer segment of the population. The household incomes, expenditures and consumption computed from these surveys are evidently higher than the actual numbers from the corresponding government agencies. This again begs the question: what should policy-makers consider when making major decisions?

The data dilemma in policy-making

Bangladesh will graduate out of the UN’s least developed countries’ club in 2024. This means, policy-making will become significantly more complex. Good data will be the key. As of now, Bangladeshi policy-makers face a dilemma in trusting macro vs. micro data.

To assess the data reliability of economic indicators on Bangladesh’s development, comparing micro-level (from household surveys) and macro-level data is a good test. The finding here is that, in Bangladesh, income, consumption and expenditure are higher when the data comes from macro sources – namely, national accounts. The gap has only been increasing in recent years. Much of the increase is because of the adoption of new calculation methods. However, the methodological change does not account for the entire discrepancy.

Identifying the data discrepancies discussed here is not a fun research exercise. It has serious policy implications. Policy-making should be done with reliable and harmonised information – meaning verified data. Cherry-picking data sources will only give mixed outcomes for respective policies. How much are Bangladeshi policy-makers paying attention to data discrepancies?

[2] Data from 14 surveys conducted in different years across Bangladesh.

[4] This is the percentage income tax amount paid by the households surveyed in each of the household survey rounds in comparison with the total income tax realised by the Government of Bangladesh in the respective years. Sample weights are applied to all survey data. The data collected from NBR Annual Report Statistics (2018) is readjusted to align with the time periods of each survey round.

[5] In Bangladesh, only state-owned companies carry out electricity distribution.