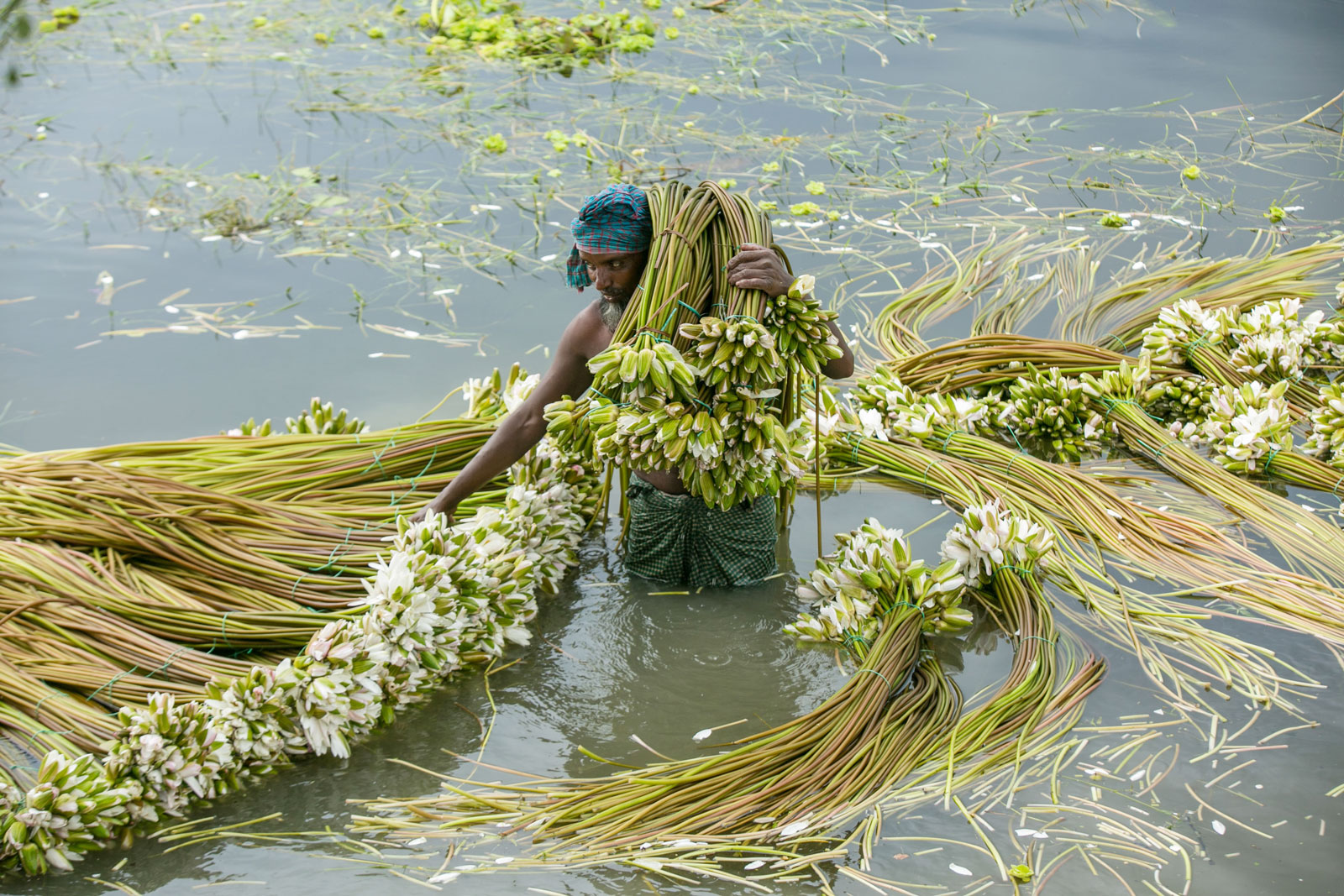 Traditionally, the rural non-farm (RNF) sector in Bangladesh consisted of an assortment of rural households dependent on a variety of livelihoods: artisans, barbers, petty food processors and vendors, craftspeople, dairy workers, potters, tinkers, tailors and carpenters. They relied on the custom of the vast farming population to whose demands they tried to cater. However, low productivity and rural incomes meant demand for the services of these non-farm groups was limited and unstable, making their livelihoods precarious. This was the state of RNF in the 1960s and 1970s, before the advent of the Green Revolution.

In the context of poverty alleviation, non-farm earnings have been found to lead to an absolute improvement in the incomes of the poor, suggesting that a dynamic RNF sector will have a strong anti-poverty impact. Subsequent studies have confirmed the positive effect on rural incomes and poverty. Over a 20-year period, between 1991 and 2011, the moderate poverty headcount declined from 78% to 27.5%, while extreme poverty declined from 64.8% to 14%.

RNF adopters experienced faster growth in income and a faster decline in poverty. RNF incomes grew 29% faster than farm incomes while the decline in poverty for RNF was 8% faster. During the same 20-year period, findings of economists Mark Pitt and Shahidur Khandker further show that the growth in RNF was led by the farm sector: a 10% income in farm incomes increased RNF incomes by 6%; within RNF, the role of the enterprise sector was most important.

Thus, from the Green Revolution, RNF began to diversify and expand, giving rise to new activities, livelihoods and earning opportunities in the wake of the introduction of new rice varieties that require modern irrigation and water control, and use of complementary seed/fertiliser inputs.

At the same time, rural Bangladesh began to experience resource inflows via international remittances and microcredit from non-governmental organisations (NGOs), which boosted rural demand for goods and services. Rural areas also experienced investment in a range of activities such as aquaculture and poultry, as well as in irrigation equipment and agricultural machinery.

Growing urbanisation and industrialisation also encouraged RNF, especially in areas well connected to major urban centres. As the urban industrial labour force expanded, rural areas forged even closer linkages with urban areas. Domestic remittances expanded quickly as urban industrial workers sent much of their savings back home to their families in the villages, in much the same way as wage-earners working abroad. In other words, rural areas witnessed an unprecedented inflow of resources into the economy, which stimulated investment, employment and wages.

Rural Bangladesh today has thus transformed significantly with the growth in rural industry and enterprises (e.g. automatic rice mills, cold stores, repair shops, modern food processing enterprises, mobile recharge shops, fintech services) and spectacular expansion of the non-crop sectors. The contribution of RNF, however, rarely figures in current development narratives. This article therefore outlines the historical role of RNF with reference to structure, employment, wages and incomes, especially of the poor and women, and its outlook in a post-covid-19 world.

National-level data confirm the importance of RNF. According to a joint study by Bangladesh Institute of Development Studies and the International Rice Research Institute, the employment share of RNF was 34.5% in 1987/88. Estimates based on Census data put this figure at 37.9% in 1991. Bangladesh Bureau of Statistics-based estimates are similar. From the late 1980s, non-farm employment began to rise, reaching almost 45% by the mid-1990s. 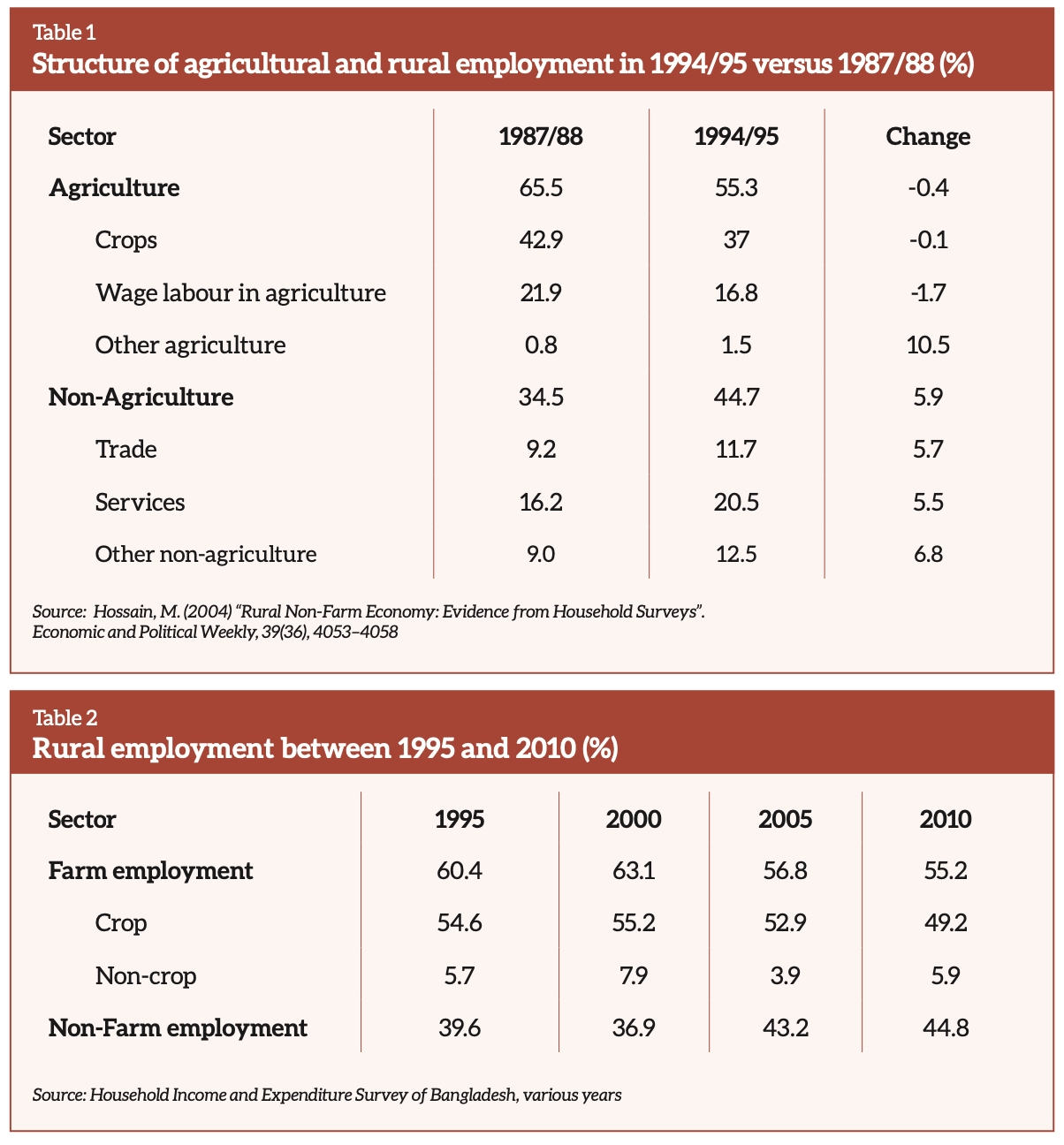 After 1995, the trend of further expansion of RNF employment continued. The sector expanded its share of employment by more than 5 percentage points. The Labour Force Survey of 2016/17, conducted by the Bangladesh Bureau of Statistics, estimated RNF at 59% – a huge increase from even the 2010 level. In other words, the preponderance of agriculture-dependent employment had shifted decisively away into non-agricultural work in rural areas. This speaks of a structural change in the rural labour market that likely reflects a substantial realignment of livelihoods.

The question is what is driving these changes. If it is leading to increased employment and higher incomes, then it is likely to be related to higher productivity. It could also indicate a move away from land as a source of livelihoods in rural areas. Perhaps this may be a rural development journey that does not have to depend on access to land in a land-scarce Bangladesh.

Explaining the dynamics
The RNF sector has grown and is currently making a significant contribution to rural employment. Factors explaining the rise in RNF include the Green Revolution, which started in the 1970s; microcredit and non-farm enterprises; and the exit from land-based work. Notably, a 2019 paper by development economist Kazi Iqbal (“The Rural Non-Farm Sector in Bangladesh, A Review”) did not find any strong evidence of remittances affecting RNF incomes or employment. In other words, although researchers have noted the expansion of RNF, explanations as to how RNF has managed to take off are few and far between.

RNF is unlikely to have emerged on its own. With the onset of the Green Revolution, new demand was created for a host of services. For example, irrigation pumps needed to be procured, installed, maintained and serviced. Similarly, fertiliser and pesticides were in high demand – an entire supply chain needed to be established throughout the country. Meanwhile, as agricultural mechanisation sped up, demand was created for power tillers, tractors, threshers and harvesters – again creating many new opportunities for livelihoods. Similarly, new kinds of entrepreneurship developed around irrigation equipment, leading to the emergence of a rental market.

Rural Bangladesh also witnessed a number of other “revolutions.” The “blue revolution” in aquaculture has been phenomenal. On the back of aquaculture, numerous RNF activities emerged related to processing and trading fish. Similar successes can be reported for poultry, dairy, mushrooms, flowers, fruits and horticulture – indeed, modern agriculture based on hydroponics and greenhouses is also emerging. These changes in the economy, similar in principle to those during the Green Revolution, have strong linkages with the RNF sector.

The opportunities provided by the expansion have been made much more accessible by the liquidity now available in rural areas, in part assisted by domestic and international remittances, rural banking and microcredit. 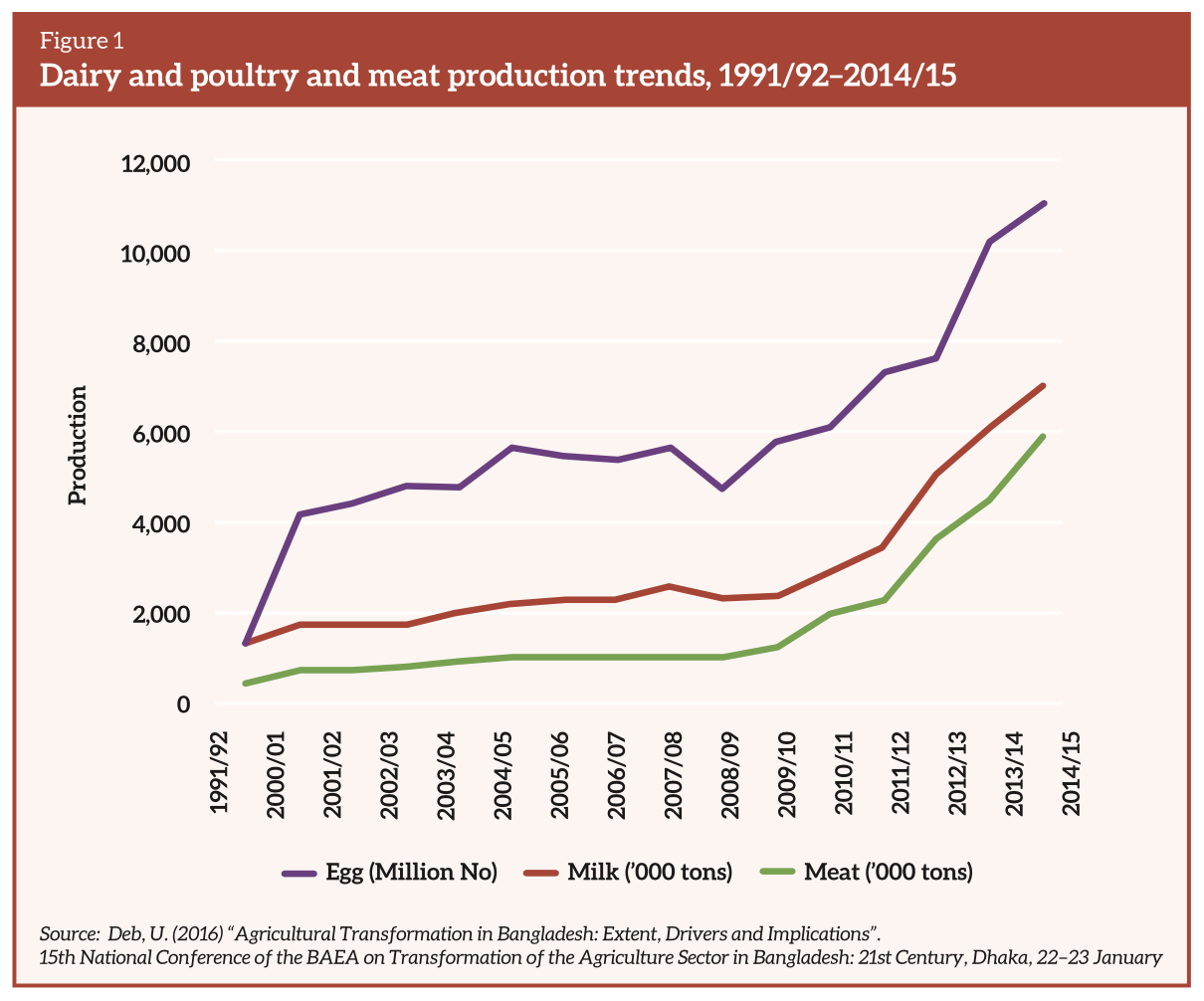 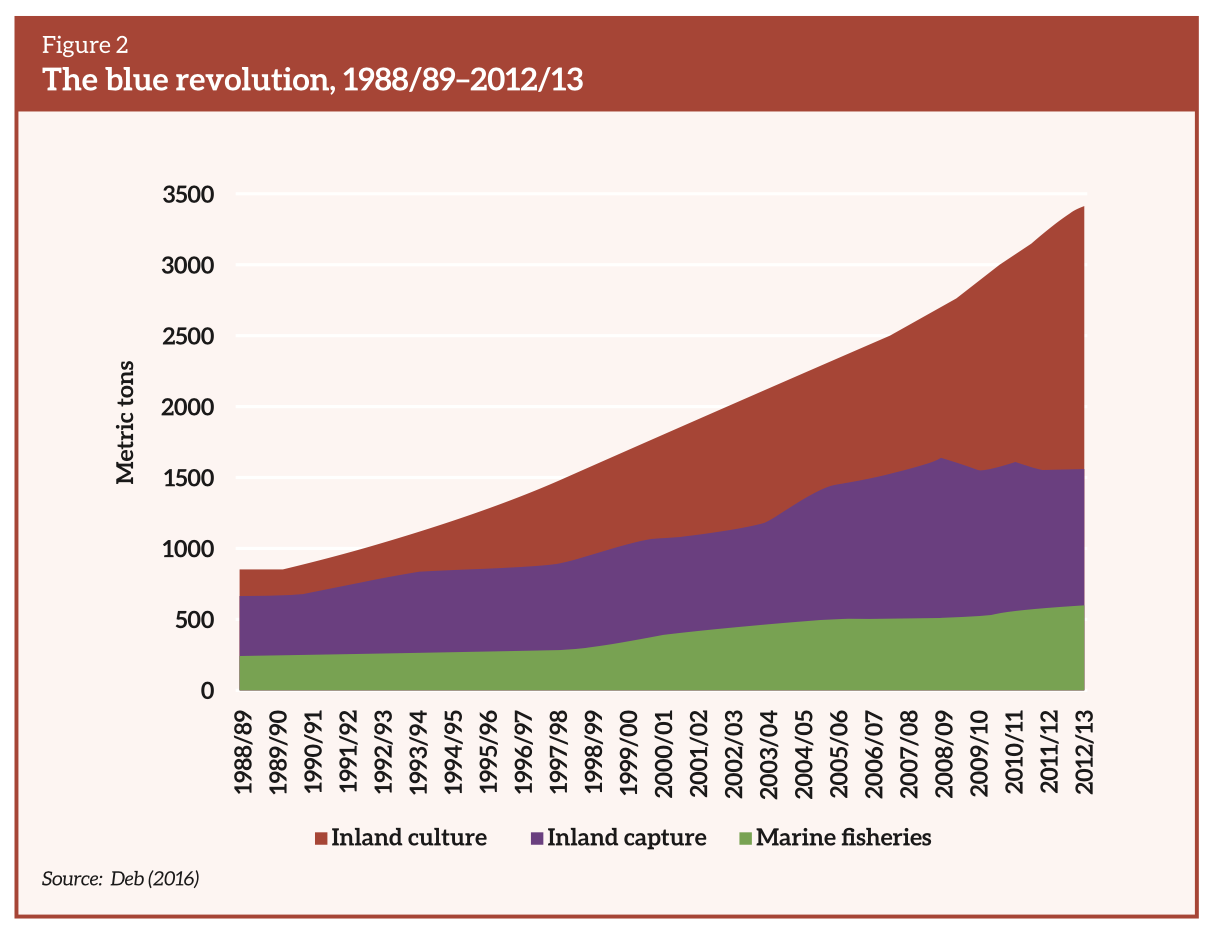 Public investments and the work of NGOs cannot be overlooked either. Investments in education, health, rural infrastructure, rural electrification and solar home systems have all generated considerable RNF activity. Private sector investments in agent banking, mobile financial services, agro-processing industries, rice mills, storage units, mobile phone networks and transport, along with growing rural demand for consumer durables, have joined traditional NGO-led activities for the poor and women in the rural areas. It is therefore not by accident that rural self-employment has now given way to salaried work as the dominant type of RNF employment.

It was thus a convergence of many forces that served to dynamise agriculture, which in turn led to a dynamic RNF sector. The early decades were difficult, with development finance severely hamstrung and overly dependent on foreign aid, but domestic resources have gradually replaced this external assistance. Unthinkable in the 1980s, Bangladesh has now been able to narrow the gap that resulted from inadequate savings and scarce foreign exchange.

Looking ahead
The way forward now is to attract and embrace technology in areas of Bangladesh’s comparative advantage. Bangladesh is young, entrepreneurial and not risk-averse. In other words, it is blessed with a young population that can lead the country to the next phase of development. In agriculture and RNF, the road will almost certainly lie in high-value agri-production and processing, and related services, which will be skill- and technology-intensive. This will require massive investments in human capital and market infrastructure. At the same time, our financial systems must address the demand of small rural entrepreneurs and modern farmers – a segment that has historically been difficult to reach. The emergence of fintech should mean these outreach issues will soon come to an end – although considerable prodding by policy-makers may be required for this to succeed.

One of the most important lessons of covid-19 is that agriculture and the RNF sector cannot be ignored. In moments of crisis, it is precisely these sectors that will impart a certain resilience and stability to the domestic economy and livelihoods, enabling Bangladesh to absorb shocks much more confidently. Future development strategy must continue to attach a high priority to modern, high-value agriculture and agro-processing, storage and marketing. These are the next logical steps for a post-covid-19 world.